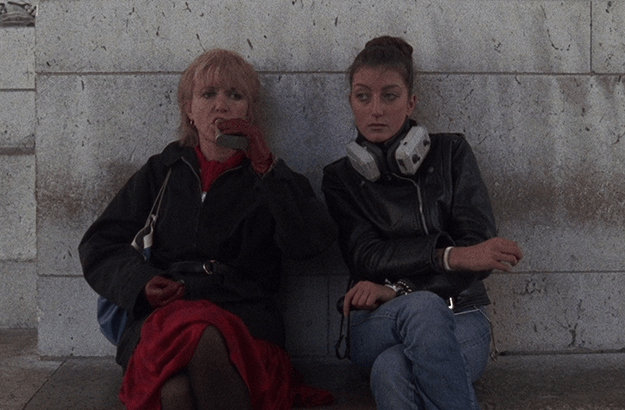 Le Pont du Nord was made in 1981, and released a year later. It was filmed in Paris. The film stars Bulle Ogier and her daughter Pascale.

Le Pont du Nord is a strange story, about Marie, a claustrophobic blonde woman with a liking for red dresses and who has recently been released from prison, wanders into Paris. She encounters by chance a brunette, Baptiste, a young female street urchin. Baptiste is a self-proclaimed kung fu expert, who also wields a knife, and rides a motorcycle. She is intent on slashing the eyes from faces in advertisements, and accompanies Marie on her quest to solve a mystery. Marie’s former lover, Pierre, has left a suitcase full of clippings from newspapers, patterns and maps of Paris, that all point to a disturbing labyrinth complete with signs and allusions that seem menacing, but the meaning of which is unclear.

Coincidences Can Be Destiny

Baptiste and Marie meet three times b y chance on the streets of Paris. Baptiste tells Marie that she shouldn’t try to understand, their meetings must have been according to some invisible plan. One meeting is an accident, two is chance, but three is destiny. Marie resists the suggestion that life is re planned.

The two women amble around Paris in the film Le Pont du Nord, follow a mysterious map, dream up imaginary conspiracies, and come across several Parisians, all seemingly named Max. One of the characters they meet is the Monte player. Three card Monte, also known as the three card trick, is a confidence game in which the victim is tricked into betting a sum of money on the assumption that they can find the money card among three face down playing cards. Monte play is the classic shot con, in which an accomplice pretends to conspire with the victim to cheat the dealer, but in the meantime conspiring with the dealer to cheat the mark. Chances are almost impossible with a good con artist against you. This trick has been around since the fifteenth century.

Baptiste on her motor cycle rides excitedly round Paris, and she and Marie later discover a mysterious spiral map. Marie marks squares on the map, containing the inn, the pit, the bridge, the tomb and the maze. Each square represents a real life Parisian landmark. They all are a potential deadly challenge to the two women. In the film Le Pond du Nord the camera bounds along with the two heroines through the maze like streets, with attention paid mainly to the visual effects, like the glow of sunlight on faces and streets.

The filmmakers in Le Pont du Nord pile on the coincidences, as well as exhilarating comic sequences, but no real conclusive ending. There is fate and chance, and the thin line between game playing and real life. The game offer better odds and winning chances in Jackpotcity casino NZ. In Le Pont du Nord, a line of dialogue turns an unlucky Parisian passerby into an enemy spy, a cobweb into a curse of eternal sleep, and in one of the film’s most exhilarating comic sequences, a theme park ride into a fire breathing dragon.